Heritage Tourism in Sikkim for Honeymoon

Honeymoon couples seek a lot of peace and tranquillity apart from a lot of natural splendour and glory. Sikkim is a haven for city souls who seek freedom from gruelling life of city and its fast-paced days and nights. Sikkim has a lot to offer to the honeymoon couples be it the unlimited extravaganza of natural beauty and landscape or the status of being in one of the most beautiful places on earth. The exoticism of natural bliss that emanates from the Great Himalayas makes the land of Sikkim a paradise and what can be better that to spend a peaceful honeymoon in paradise on earth. Honeymoon in Sikkim is combines everything that honeymoon couple would desire. The Sikkim honeymoon tour packages are affordable and have been designed meticulously to include the most romantic aspects of holidays that you will enjoy with your soul mate. The solitude shall add to your love for each other. The hills, beauty of exquisite monasteries and the snow-capped peaks along with the clear lakes and the gushing rivers shrouded by smoky and misty air and bellowing clouds make Sikkim the place of your dreams. Plan a budget or a luxury honeymoon package to match your needs. 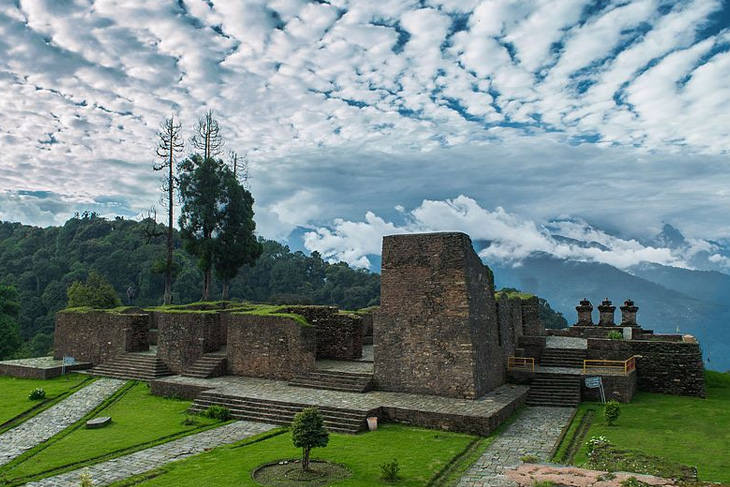 Rabdentse has an alluring charm along with the holiness associated with it that is bound to attract the honeymoon couples for a visit while venturing for a honeymoon to the West of Sikkim. It has a mystic ancient historical connection as it was the second capital of the erstwhile Kingdom after Yuksom. Rabdentse was the second capital of the former Kingdom of Sikkim during the period from 1670 to 1814. The King of Sikkim has been known to rule he kingdom from Rabdentse till the year 1814 A.D. The ruins lie hidden from the main road view within a walking distance from the Pemayangtse Monastery. Honeymoon couples shall immensely enjoy the captivating scenic view from the top of the ruins that pans the entire the valley. One can lay their eyes and rest them on dizzying beauty of the Khang-chen-Dzonga range. The memories of the peace, calmness and beauty is something to be cherished and will remain etched in the memories for lifelong. But later this exotic capital city was destroyed by the invading Gurkha army and unfortunately only the sad ruins of the palace and the chortens are to be seen here now. 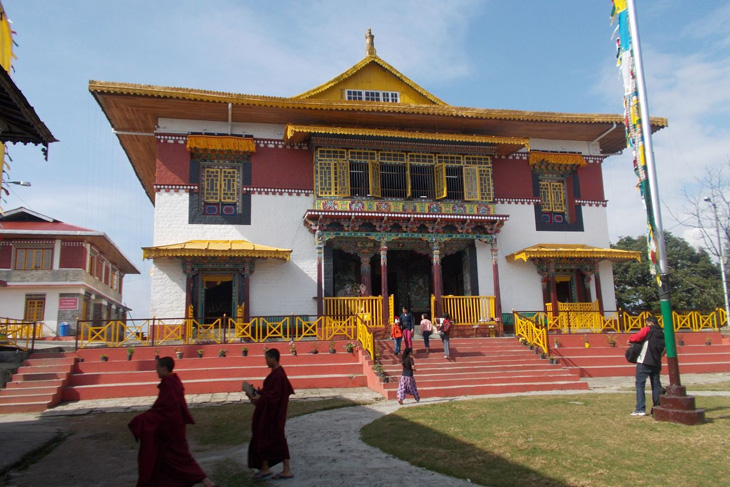 Pemayangste Monastery is greatly alluring for the honeymoon couples as it is one of the oldest monasteries of the State of Sikkim and honeymoon couples usually visit this sanctimonious complex to seek blessings for the good of the newly formed matrimonial bond. The Monastery is cosily perched on the top of a hill at an altitude of 6300 feet. The height acts as an advantage for providing magnificent panoramic view of the Himalayan ranges, the heavenly hills all around and the lush green countryside and honeymoon couples will undoubtedly cherish. There is also well-furnished PWD Guest House just across the Monastery on a small and quaint hill top that can act as the lover’s den for the newlyweds. The monastery was originally established by Lhatsun Chempo, who is known to be one of the most respected Lamas and who had also performed the consecration ceremony of the first Chogyal or Monarch of Sikkim. This ancient monastery belongs to the Nyingma Sect and is ascribed the status of being one of the premier monasteries of the State. The monastery premises is blessed with the privilege of hosting all religious functions of the erstwhile monarch. Pemayangste Monastery can be identified as a high-class monastery for ‘Pure Monks’ also called Ta-Sang which refers to monks who are celibate and does not have any physical deformity. Another veritable attraction that is placed inside the monastery is a wooden structure that depicts the Maha Guru’s heavenly palace called Sang-tok-palri, which is considered a brillinat creation of Dungzin Rimpoche. 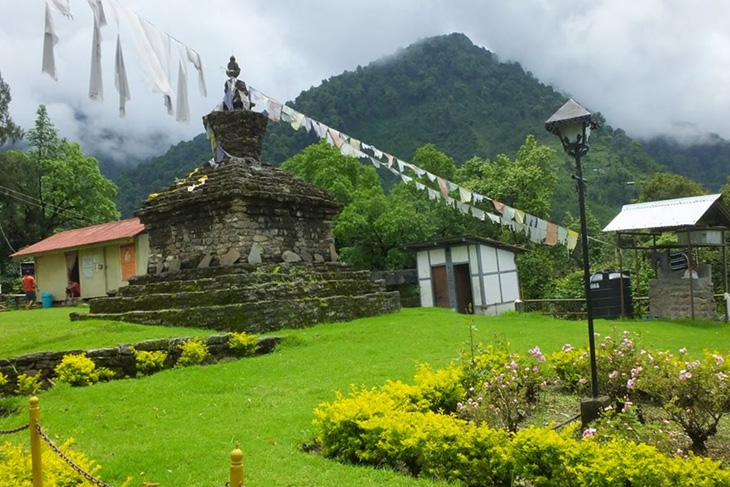 Dubdi Monastery was the first monastery established in Sikkim in the far past after the consecration ceremony of the first Chogyal. The monastery is located on a picturesque hill top above the famous Yuksom valley that is surrounded by virgin forests. The Dubdi Monastery involves a 4 kilometres trek through lush greenery, sparkling streams, dense wild woods of oak and chestnut trees and magnificent ancient bridges. The only way to approach this monastery is through this trek that honeymoon couples will enjoy and cherish lifelong. Negotiating the steep slope leading to the monastery for about half an hour will add thrill to the expedition of the honeymoon couples. Dubdi Monastery forms an ideal place for recluse lamas seeking peace for meditation and the peace shall enthral the visitors too. 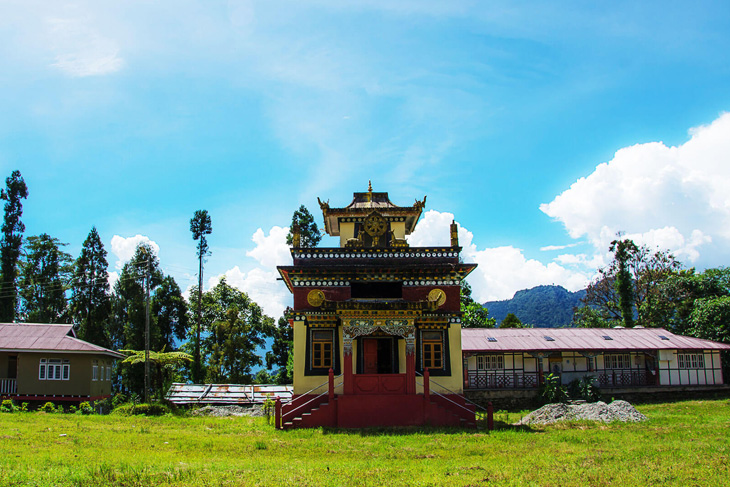 Tashiding Monasetry is of immense beauty and peace with mystic snow-capped peaks towering on all sides and rustic charm emanating from all the corners of the Monastery premises. This monastery shall serve as a place of religious sojourn for the honeymoon couples who will enjoy the tranquillity and beauty of the surroundings. This Sikkim Buddhist monastery truly reflects the old world charm and enthrals the visitors. Enjoy the religious view of the most holy Chhoedten or stupa of Sikkim that is kept in here and the visual appeal of the area surrounding the shrine that has been decorated with prayer flags and several stupas. There is a pot of holy water kept inside the temple which is considered auspicious and is used only during the festivities. The couples can also absorb the harmony and solitude with the pretty fluttering prayer flags and holy chants that reverberates around the temple complex. The couples can get engrossed in the serenity and enjoy a perfect place for some great moments in the lap of nature. A day out at the ancient and holy monastery in Sikkim can be of infinite memories to cherish for long. 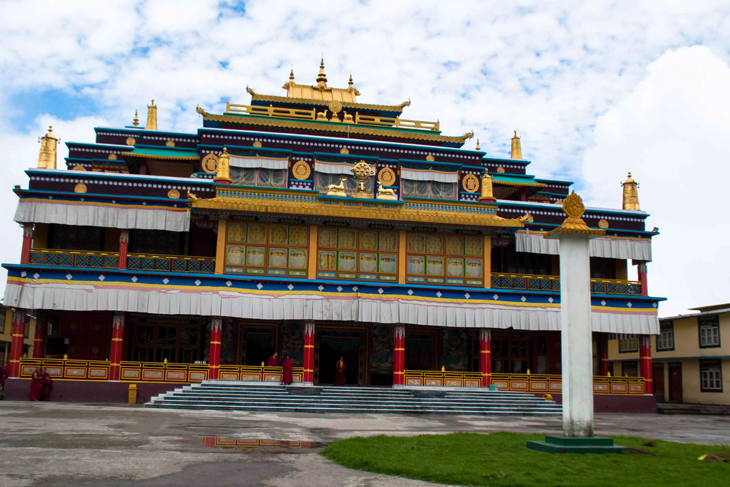 Rumtek Monastery has an undeniably unpretentious charm that is fed by the thrills of the hilly terrain. Rumtek Monastery in Sikkim is an idyllic site in the lap of nature located 23 kilometres from Gangtok. It is a wonderful three-storied monastery that is located opposite to the towering mountain ranges. The nooks and corners of the monastery charms all with the essence of the beauty of fine architecture that leaves the visitors fascinated. Rumtek Monastery offers amazing sights of the whole Gangtok town spread picturesquely across the opposite hill. It is one of the largest monasteries in Sikkim and belongs to the Kargyu sect. It was built by Gyalwa Karmapa way back in the 1960s.